We have the doors from the 37 parts truck that I knew we would probably need inner door parts for.  It turns out we need BOTH latches - and the window regulators are in better shape than any others we have (as well as the latch release mechanisms).  Soooo, I set off to remove all the %&$# rusty screws from the doors.
My weapons of choice.  Gunk penetrating oil, a hammer, a selection of screwdrivers, a small crescent wrench, and a hacksaw blade. 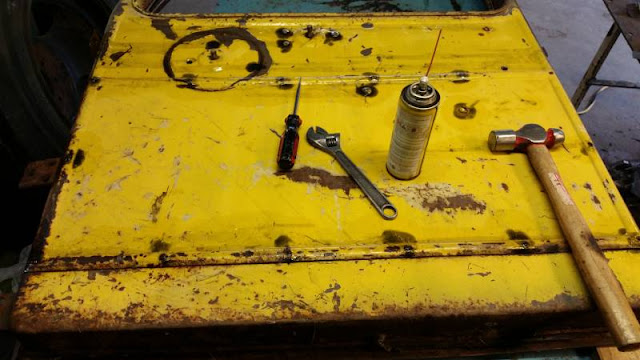 I cut a sharper groove in the rusty screw head for the screwdriver, insert screwdriver, give a couple of hard taps with the hammer and most of them came loose without my cussing. 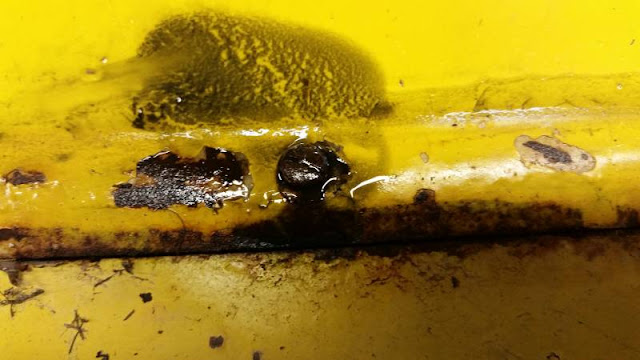 After a particularly stubborn one, I would yell ''I WIN!'' because it felt like such a victory, haha! 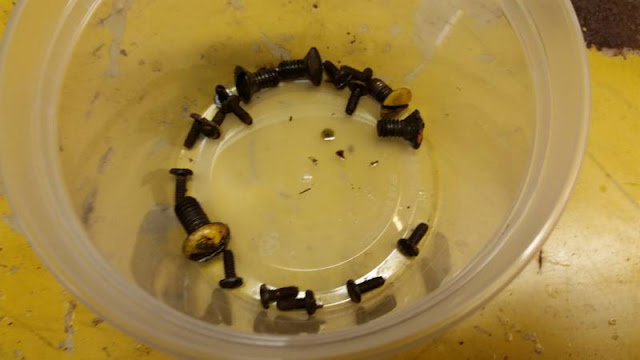 Then, there would be the occasional super stubborn one, ugh.  This one I ended up grinding the head off of it - it was a screw from the non-existent arm wrest, so I didn't need to save the threads for right now.  We are going to sell the door, so the next person will have to worry about that one loan screw on this door.  Amazingly, this door has NO ROT on the bottom of the carcass.  It is also interesting to see what an original door with no rot looks like!  It has two elongated (factory) drain holes in the bottom as well as a channel on the bottom with a door sweep rubber.  Interesting! 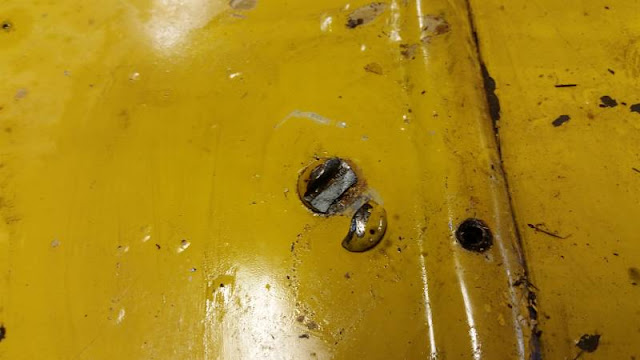 Whew, finally got the door panel off!  Underneath was this color - I had no idea they originally did a khaki brown interior on these trucks, haha.

This one was a bugger.

I ended up starting to grind off the head - and then it moved.....  so, I was able to get it out with the pliers.
I WIN!

whoop whoop!  Working door latches in both doors now!  It was a MIRACLE that I got those little headless screws out  that hold the handles in.  Seriously!  The passenger door knob is keyed - which is weird (why not the drivers door?) - it is at the locksmith now HOPING to get it functioning and a key.  I am also HOPING he doesn't ruin it because it almost irreplaceable!  I have had a total of 4 sets of doors and it is the only one I have!

I am ordering window regulator bushings today....might as well replace the rotten ones while I have it all apart and have smooth operating regulators with the new fuzzy channel and new rubber setting channel when I get new glass made :)  I think we will just go with clear glass and we can tint the glass later if we decide we want to.

Anyhow, feeling victorious with those door latches!  I win!

Posted by Cascade Quilts at 9:04 AM No comments:

Today I decided to start to work on the latches and get templates done for the glass. 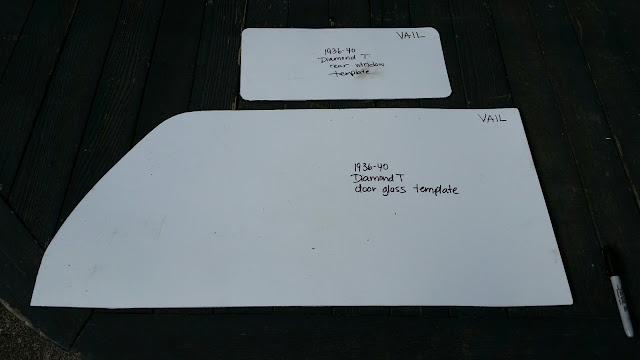 This latch spring is broken: 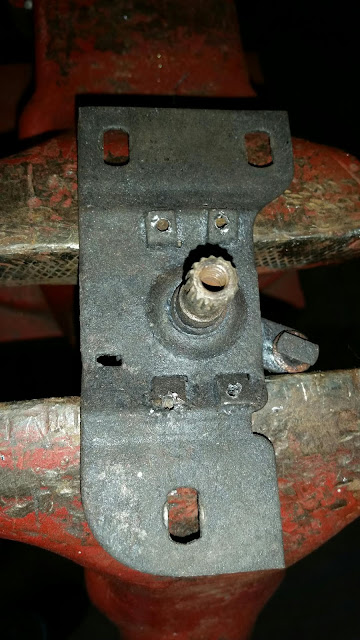 I have this latch that has the same mechanism, but the wrong plate.  So, the trick is to take the mechanisms off both plates and put the working one on the smaller plate.  Fun. 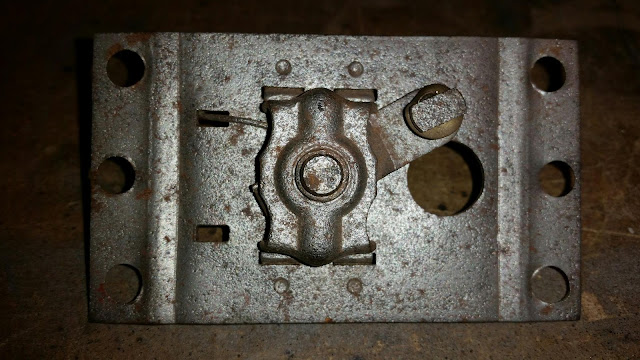 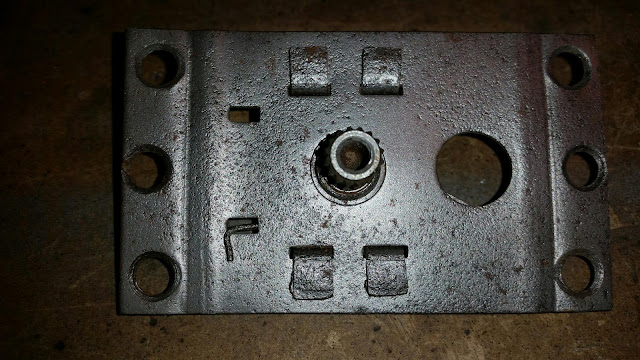 Drilled out the  spot welds and I still cannot get those tabs loose, arrrgh! 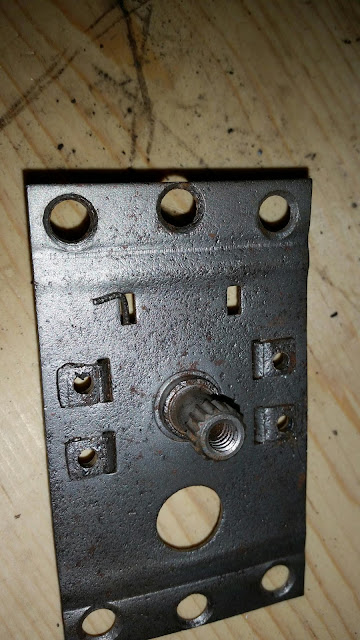 Finally end up cutting the tabs off.  Now, all switched over and ready for tack welds. 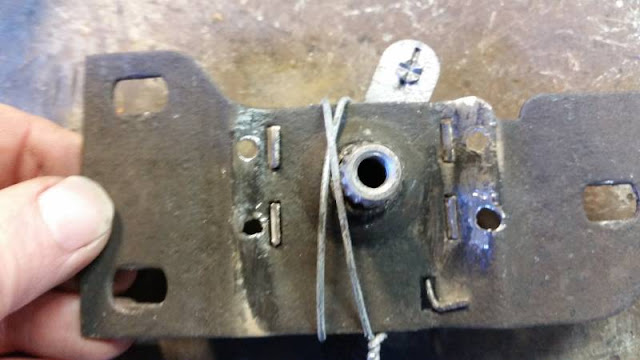 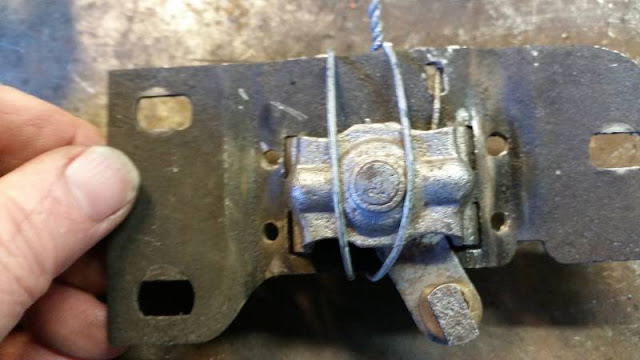 I forgot to take pics of it after the tack welds, but it turned out great and after a little WD-40 'Specialist', it worked fantastic!  BTW, I *love* that WD-40 Specialist - is is a corrosion preventer for long-term storage.  I have used it for parts after I did a rust remover on them (either electrolysis or molasses soak), and it is great!  It keeps a thin layer of a thin grease on the parts - so works good for moving parts (probably not good for parts you want to paint though).

Posted by Cascade Quilts at 2:59 PM No comments:

We are over the moon excited about this huge step in our project.  So much to do still but so much work behind us now... 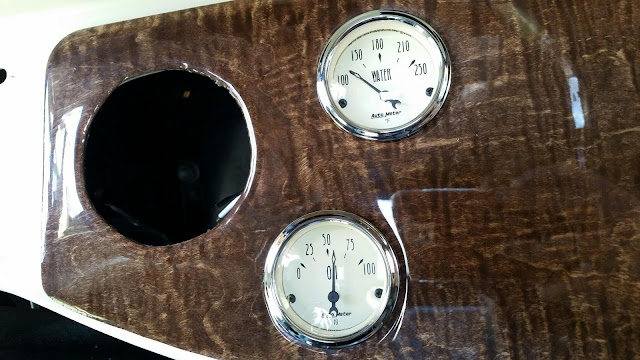 Posted by Cascade Quilts at 7:26 PM No comments:

We got the power wire ran to the starter as well as the ground wires!  Cab grounded, engine grounded!  Tomorrow we can install the battery and start it.  We are going to test the clutch (since we recently installed a new reservoir) before we reinstall the driveline... so hopefully tomorrow we will be doing our first test drive!   ::crossing fingers:: 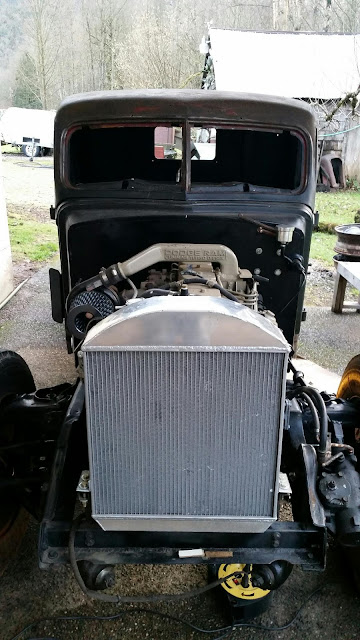 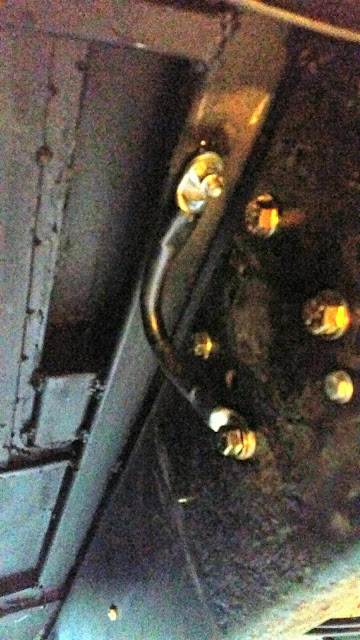 Posted by Cascade Quilts at 5:49 PM No comments: