Brian got off work early today, so we were finally able to get the primer on the sandblasted parts!  We *had* set aside the whole day Saturday to do it - and then the primer didn't arrive in time :(  Of course it came on Monday, grrr.  We will be sure to order the next primer in plenty of time *before* we get parts sandblasted! 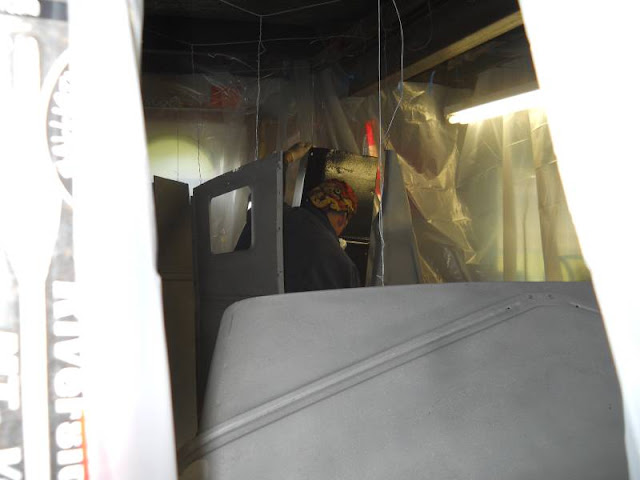 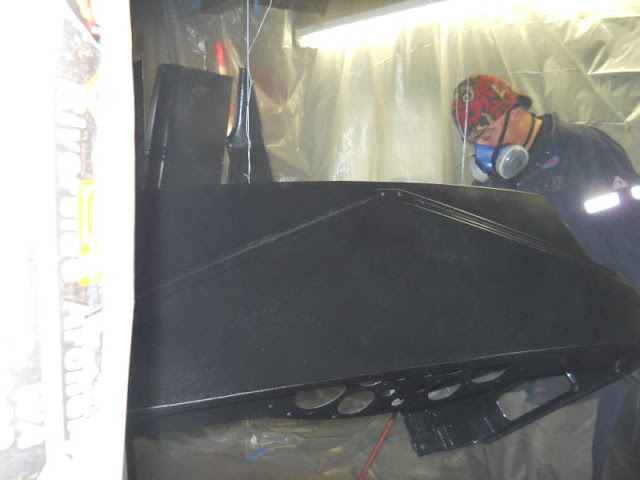 We made a paintbooth in our daylight basement, turned on the space heater until it was around 70 in there (and left the door open for ventilation), then Brian sprayed the epoxy primer we got from Southern Polyurethanes.  Black (of course!).
Such a relief to have primer, now we can set the cowl/firewall section on the frame and get it bolted in place so we can start working on the fender hangers (oh joy)........

Posted by Cascade Quilts at 4:08 PM No comments:

The radiator now has supports and is mounted! 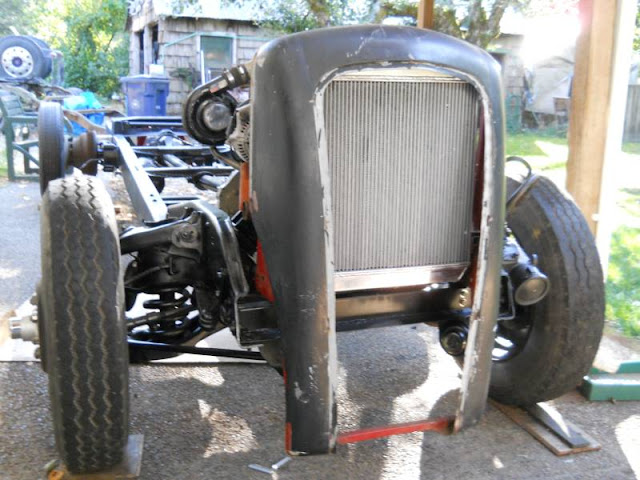 Looks like there will be room under the radiator for an intercooler :) 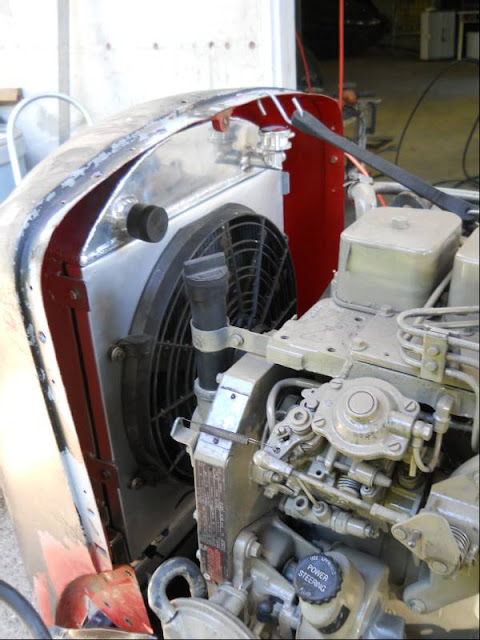 The grill shell is just sitting there, it still needs a support made. 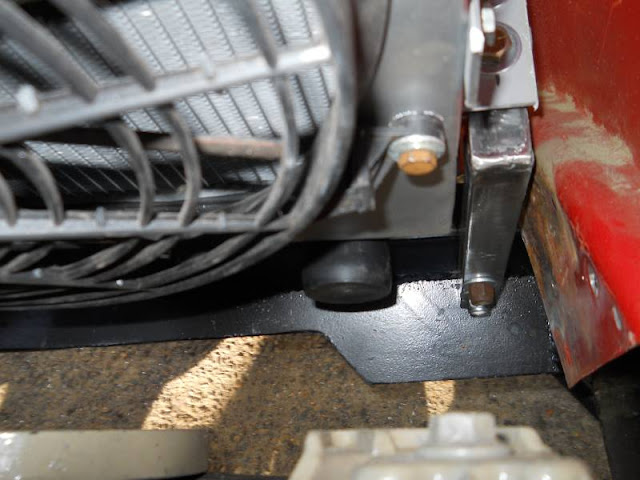 We used square tubing bolted to the front crossmember for the support, and then used rubber grommets between the support and the tab on the radiator. 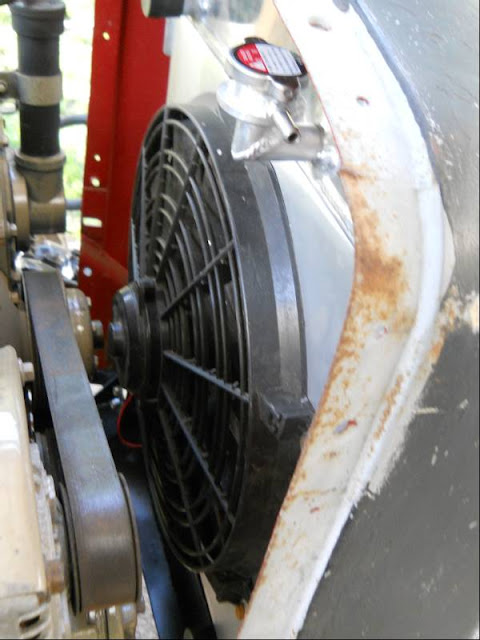 Not a lot of room to spare, it was tricky to try to come up with an idea for the supports!  I think we will still find a way to tie in the top of the radiator with the hood support too though (will be a rod from the firewall to the grill shell).
NOW, time comes to figure out the radiator hoses!  EEP!  I think we'll be able to figure out the top one, but the bottom one will for sure have to have something modified.... the outlet also faces to the passenger side - and only a little over an inch from the frame rail :( 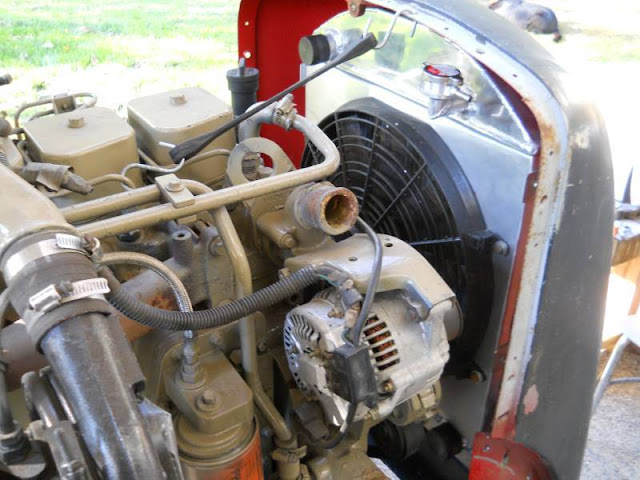 We have several pieces back now from the sandblasters and I ordered the black epoxy primer - it should be here by Friday!  So, Saturday will be primer day!  We might have to roll the chassis back and make a 'paint booth' under the carport if it's not too cold out.  If it's too cold/rainy, we'll probably make a paintbooth inside the basement (it's a daylight basement for those who haven't been here) - with heat lamps and then doors open for ventilation.  I got plenty of plastic to section off an area in either case.  We will have to rub all the parts down with wax/grease remover, scuff with a scotchbrite pad, then use the air to blow off any dust/debris - then primer!  I've not seen the epoxy primer in person yet, but I've seen it used on Overhaulin' and it looks like really THICK stuff.  I bought our primer from Southern Polyurethanes Inc. as I have heard their stuff is the best!  No tax shipped to WA and FREE shipping too!  Nice!  I got a quart of primer and a quart of activator (and it mixes 1:1), so we will have a half gallon to work with.  Should be plenty for what we're going to be spraying! 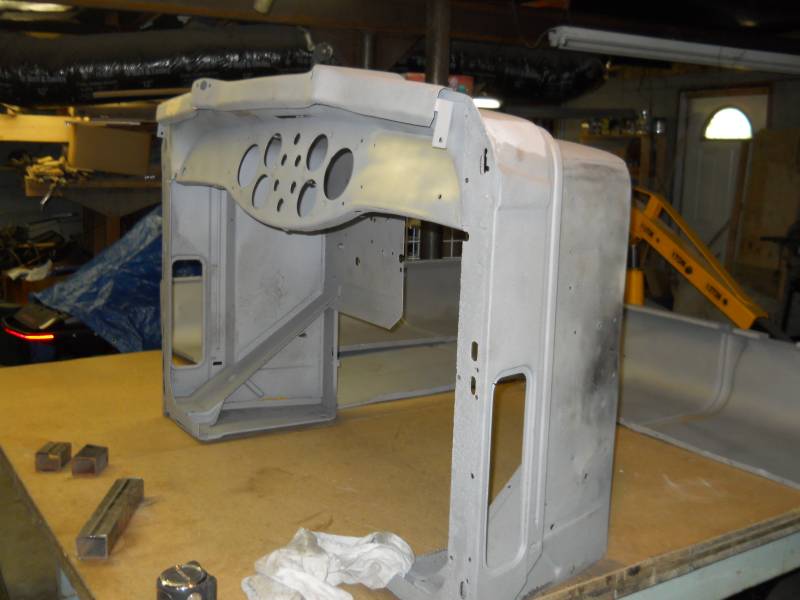 We will be spraying the cowl/firewall section, the 3 back panels of the cab, and the dash.  I am afraid to take the roof section to the blasters since it's such an awkward piece!  We don't want it set on the ground like this, and we don't want it set on the roof upside-down, maybe we'll take it with the table we have it sitting on, LOL!  All the other pieces so far I've been able to take in my Outback wagon, but this piece we'll have to take the Suburban for sure. 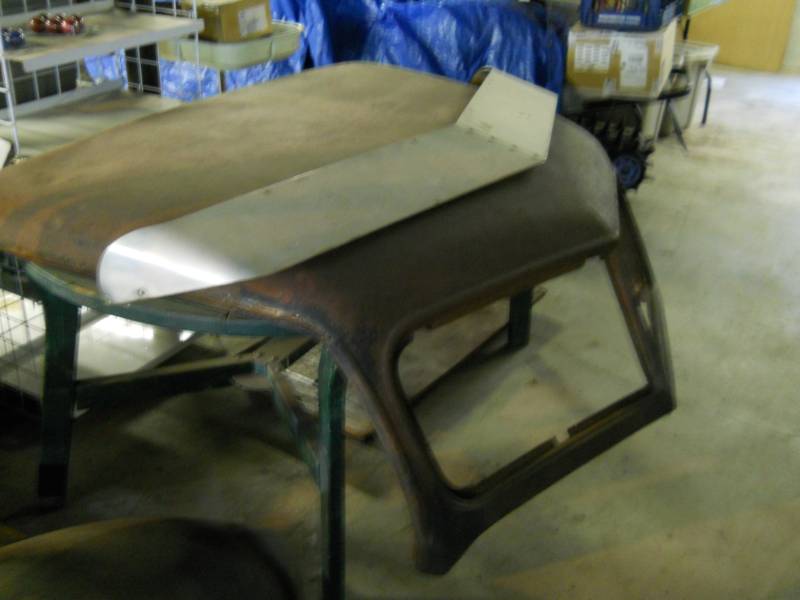 I guess we are going to wait until after our Thanksgiving week hunting trip to get it blasted, then we can finally start assembling the cab.....
I'm not sure if I've shown the visor we got before - this came off an older Peterbilt logging truck..... I think it's stainless..... it's a two piece unit and can be shortened to fit the width of the cab at the center.  It's a near perfect angle match though! (of course it will be just over the windows when it's mounted).

Anyhow, next update will be primer pics!

Posted by Cascade Quilts at 10:42 AM No comments:

A sandblasted cowl/firewall section that is.

It feels good to start work on the body pieces!  The firewall had some cracks in it, so Brian started welding on it on Sunday..... 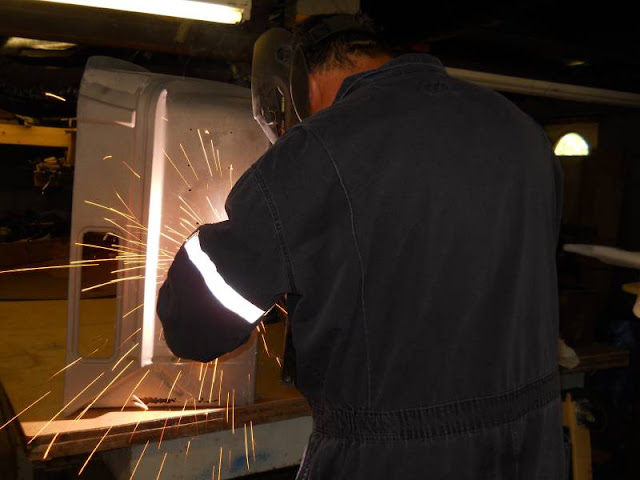 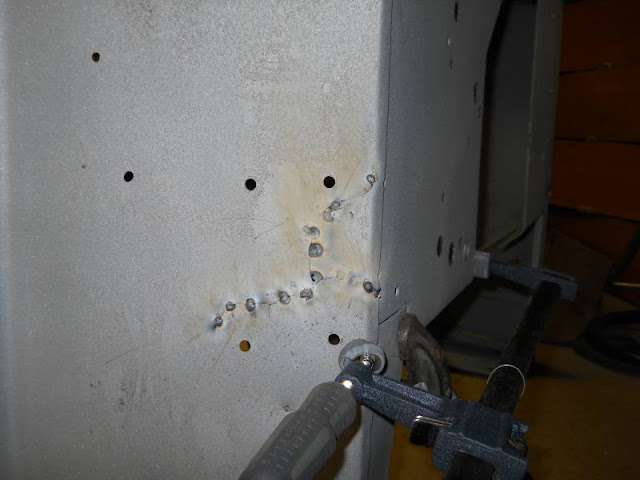 Took me a minute to figure out what was with the corners of the cowl section.....  it was a leaded seam!  This may need body filler as it's pretty porous........ 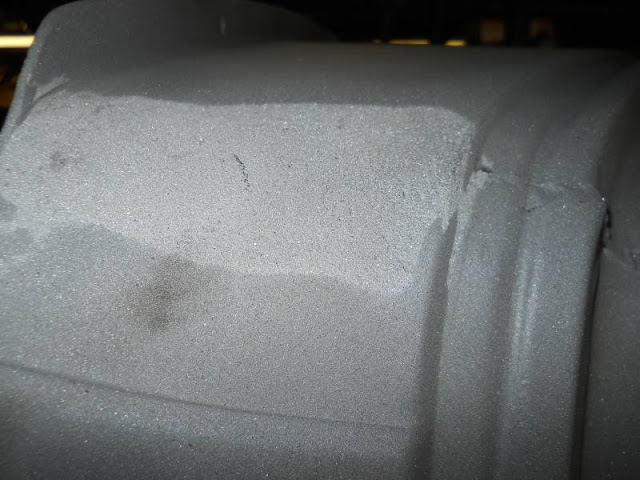 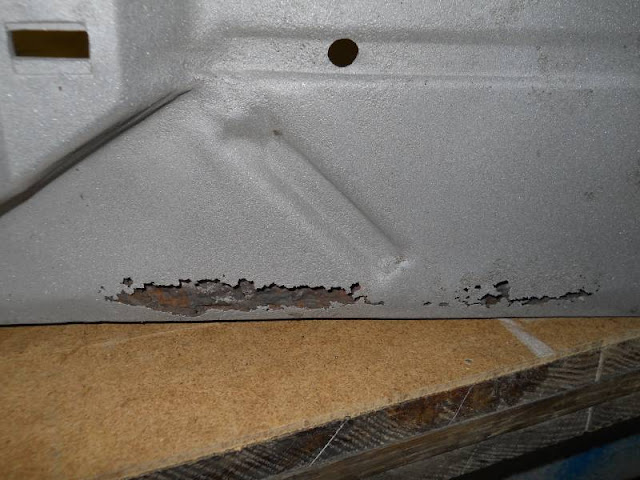 I was actually surprised that these didn't get larger with the sandblasting - even the little edges are strong still!  Brian will just cut out a rectangle and patch in a new piece, probably this weekend.  We have more parts at the sandblasters, so there might be some epoxy primer going on this weekend hopefully!
This was an inside seam of the back of the cab....... 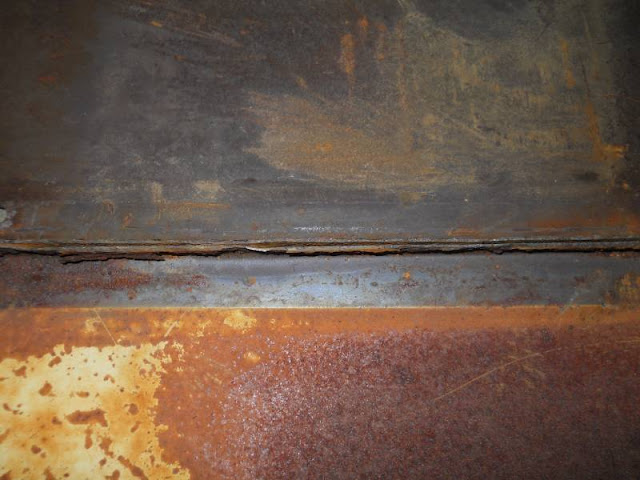 I thought the pieces of the back of the cab were going to be easy to come apart.........  boy, was I mistaken! 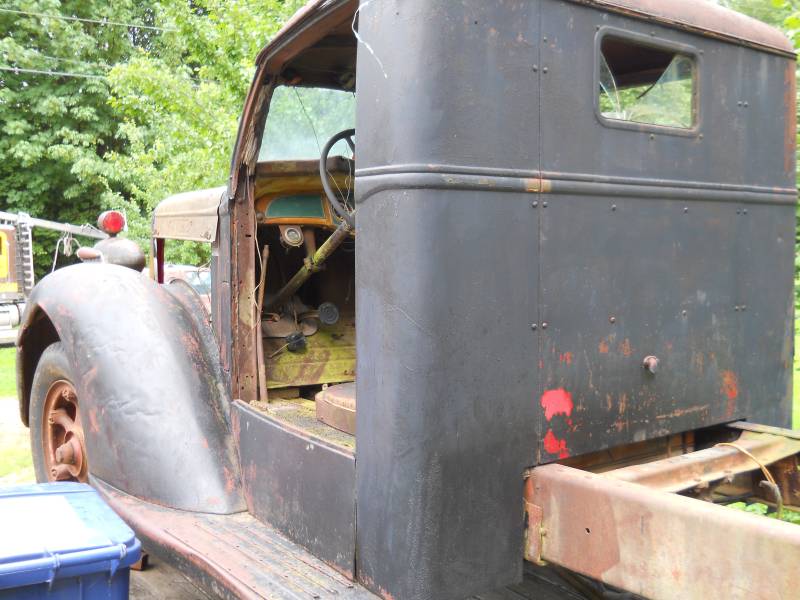 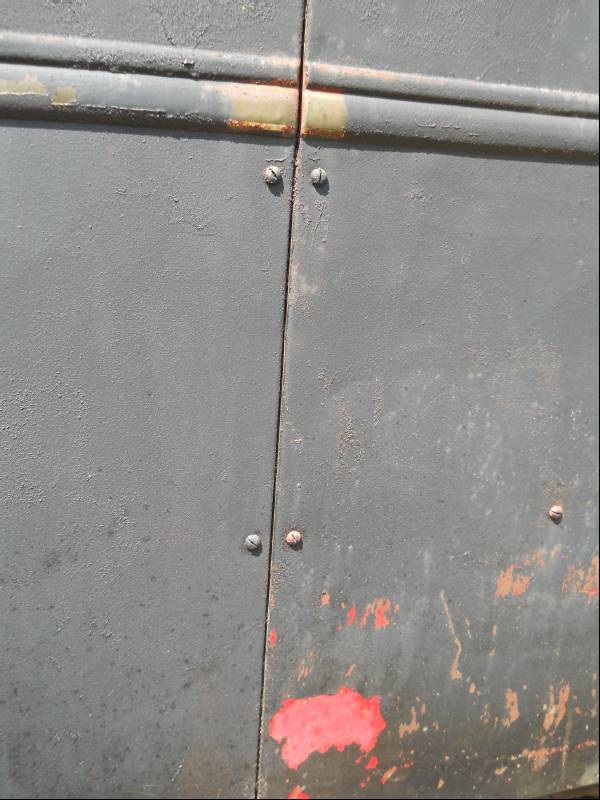 You can see in these pics - how there is a seam right above the frame rails that separate the back corners from the back window section.  There was a molding over these on the inside where they came together - I had to grind off the bolts holding it together (what I thought was all that was holding them together), but once I got the bolts off (screw heads on the outside), the molding was stuck like glue to the seam.  Could not get it off for nothing.  We ended up cutting them off :(  They are irreplaceable as far as I know, so they will have to be welded/repaired to be reused.  THEN, we thought the panels would fall apart after those were off.  NOPE.  They were spot welded!  We wanted to get all the rust blasted in the seam, so we ended up cutting the spot welds with our narrowest grinding wheel between the seams (from the inside).  It was a major pain, but they are apart and seam to be none the worse for wear where they will show anyhow!
Now, after the molding pieces are repaired, we will have to decide what to use to reassemble them......  screw heads showing aren't the most attractive, and aluminum pop rivets don't hold paint real well.......  don't know what we'll use yet!  Any ideas???!!!

Posted by Cascade Quilts at 11:11 AM No comments: